Tech employees reach out to the IG Metall Berlin

„Beyond quitting“ – Employees at Babbel elect a works council

After a new CEO took over at Babbel, the first order of business was to fire a large amount of employees working in their Berlin Mitte offices. With a works council in place, these massive layoffs would not have been possible. Coming to this realization, a group of Babbel-employees reached out to the IG Metall in order to establish a works council. 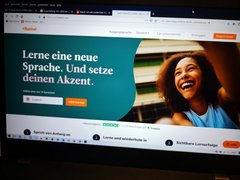 But economic success stories and not necessarily linked to a safe and stable working environment. While being aware of the general conditions in the tech industry, many employees still felt as if they were struck by lightning when the Babbel management announced in a meeting in November last year, that „anyone who receives an E-Mail within the next 30 minutes will have to leave the company“. Wanting for the rank-and-file of Babbel to have a say in company matters like these in the future, the employees have installed their works council by voting on the 18th of February. The works council has constituted itself on the 10th of March of this year.

„When the massive layoffs took place in November, I understood that we were missing a works council as the institution that has all the legal possibilities of co-determination in our workplace“, says Ute O., who has acted as a member on the electoral comittee. Equipped with the rights guaranteed by the Works Constitution Act („Betriebsverfassungsgesetz“), works councils can prevent, prolong or at least lessen arbitrary dismissals by managements and HR departments. The case of Babbel shows the dramatic consequences for employees in companies without co-determination executed by works councils: the victims of the layoffs were young parents, working students and colleagues without a German or European passport, for which unemployment can be a severe risk for their residential status.

Stronger with the IG Metall

But what is there to think about and pay attention to when establishing a works council? Together with the IG Metall, the tech employees prepared themselves for their election. „We sat down with all interested employees, later in the process even separately with the candidates running for the works council, and discussed their questions in Q&A-sessions. Most of the time, the focus of these sessions were the juridical aspects of the election“ says Sören Lieske, who works as Organizer for the IG Metall Berlin, and adds: „but we also discussed the larger picture, meaning the tech and start up culture itself. Is there maybe something beyond the toxic culture of being forced out or simply quitting by yourself and then moving on to another company? Is there maybe even a chance for a collective agreement at some point in the future?“

Many employees appreciate the routine and knowledge that the IG Metall has when it comes to works councils. Daniel Schweighöfer, member of the newly elected works council evaluates: „The support by the IG Metall was overall very good! Without their consultation, the whole election process wouldn’t have worked out so smoothly.“ Ute adds to that: „I really appreciated the professional advice provided by the IG Metall. But what was even more important to me is the emotional support that the union organizers gave us – the sheer knowledge that we are not in this alone. The strive for better working conditions can only work out collectively – together, we are stronger!“

New insights on both sides
One conclusion, that the tech workers and the IG Metall Berlin came to is, that there is more potential to work together in the future and that the myths about tech- and startup workers being unable and unwilliging to organize was clearly proven wrong. „The way I see it, is that a lot of my colleagues are rethinking their priorities. It seems, the discourse has changed over the last couple of years, and I think that is mainly because a lot of them have started a family. Sure, it’s nice to have the opportunity to have another job next week, but to find one, which is compatible with the needs of your partner and kids is actually not that easy.“, says Daniel.

Which topics the works council wants to adress right away will be evaluated within the next weeks and months. Data protection, a working agreement on systems monitoring the social behaviour of the employees, a collective agreement – there are endless options. And even though a lot of employees still describe the wave of dismissals from November 2019 as intransparent, traumatizing and an attack to the overall working moral in the company, Ute and Daniel are sure, that their working conditions will eventually improve thanks to their works council.